Introduction to Literary Theory and Liberal Humanism: A Lecture by Dr. Madhu Grover

It was on Thursday, the 29th of August that Jabberwock, the Academic Journal of the English Department organized its first lecture for this academic year to help students, especially freshers to navigate their way through the major literary theories which could actually turn out to be a boon for their time ahead in the department.

We all know how intimidating it can really get when you are bombarded with theories like Structuralism, Queer Theory, Post- modernism, Post-colonialism, New Historicism by your professors within the four walls of a classroom. It was to ease out this stress and anxiety that Dr. Madhu Grover, a senior professor of the department conducted a lecture on the ‘Introduction to Literary Theory and Liberal Humanism’
Terry Eagleton’s ‘Literary Theory: An Introduction’ and Peter Barry’s ‘Beginning Theory’ were the major reference works of Dr. Grover in this lecture. To begin with, she briefed the audience about what literature truly was and how we as literature students needed literary criticism as a necessary tool to understand these mysterious literary texts.

Dr. Grover further gave a background of the European politics during the eighteenth century and highlighted an important aspect of how the power of literary texts got linked and thereafter affected with political switches and moderations in nations all across the globe during those times. Thereafter, Dr. Grover by referring to Chaucer shed light on how various social aspects, values and most importantly gradual social growth was reflected in literature. From the evolution of journalism because of literature to the rise of the middle class and then finally to talks on capitalism, urbanization and industrialisation, there was no topic that was left untouched by the learned professor. She continued to enlighten the audience about literary aesthetic value and the open and democratic nature of literary criticism as well as the innumerable forms which were followed to write it throughout the ages.

Dr. Grover was also seen delving deep into the aspects of the emergence of radical press and then the rise of feminism in the world. She talked about the unfortunate boost of politically biased journalism as well as the commercialisation and politicisation of literary texts. Not only this but she was also seen highlighting a few problems of liberal humanism. To conclude the lecture, she briefly touched up the rise of English studies in the renowned universities of the colonies and the emergence of literary review.

Everybody in the room was seen penning down Dr. Grover’s wisdom in pages. Not only was the lecture very enriching but also very helpful in the truest possible sense and we look forward to having many such informative sessions with her in the future. 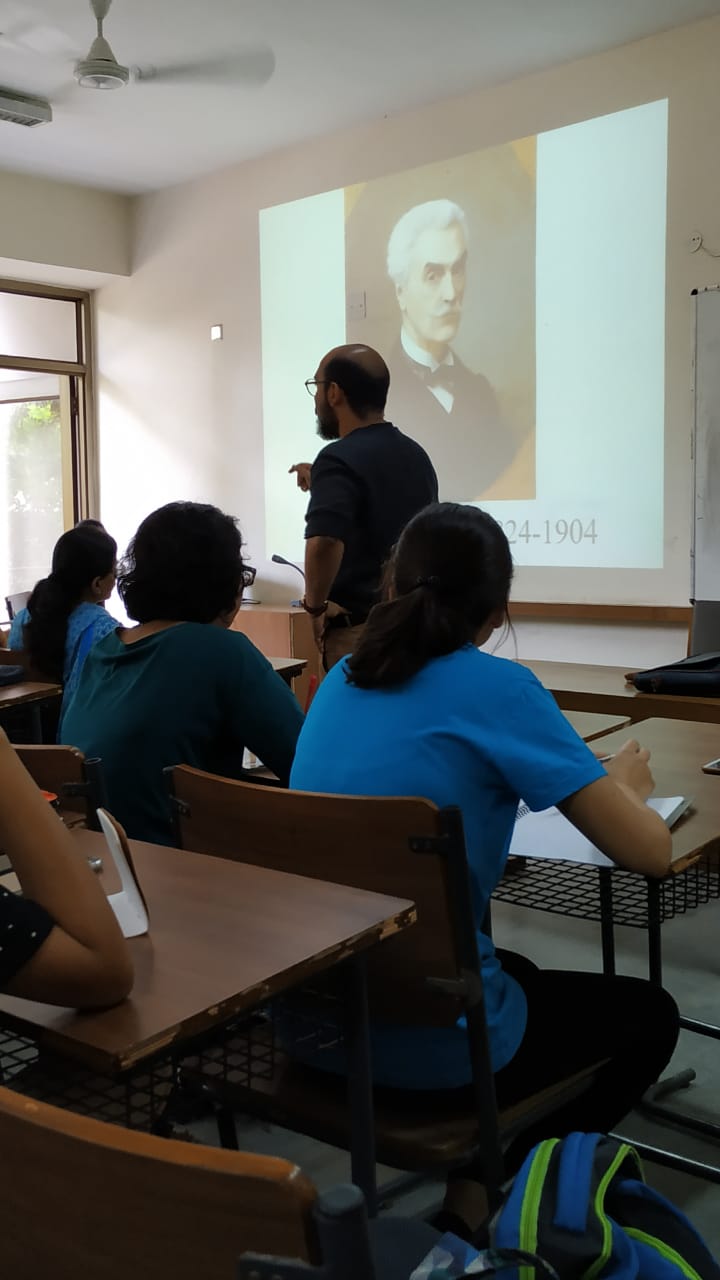 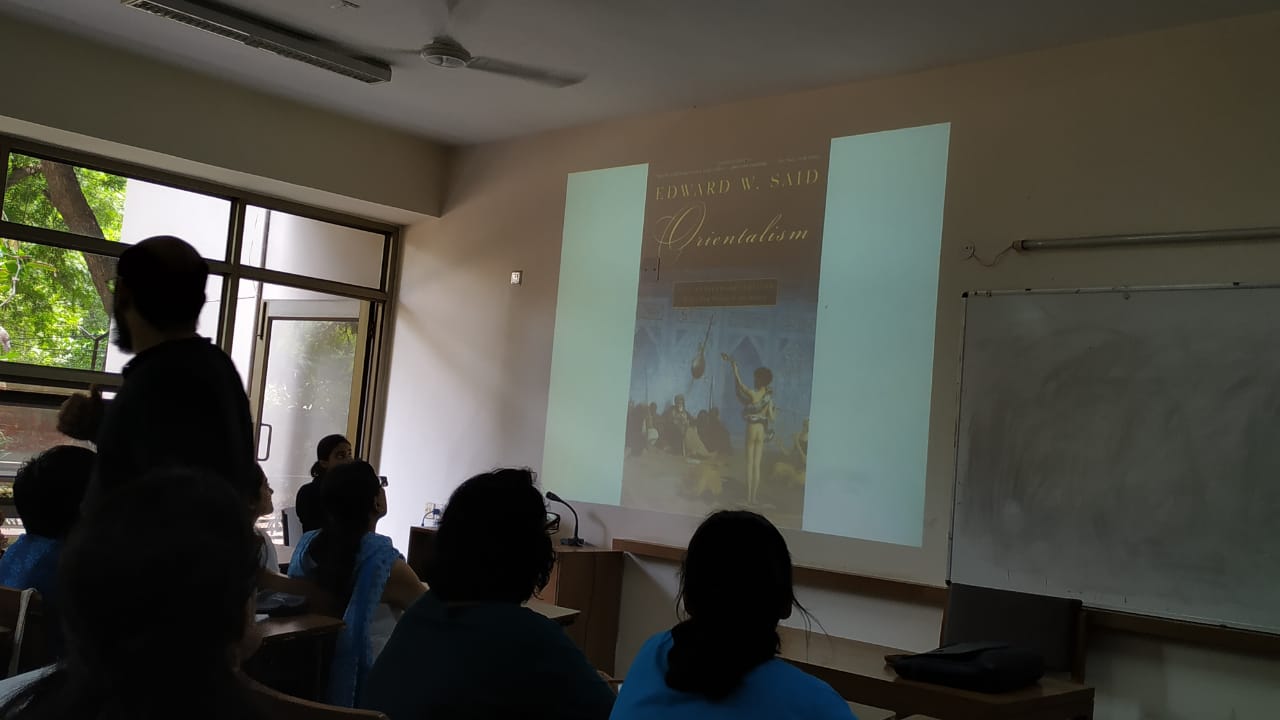 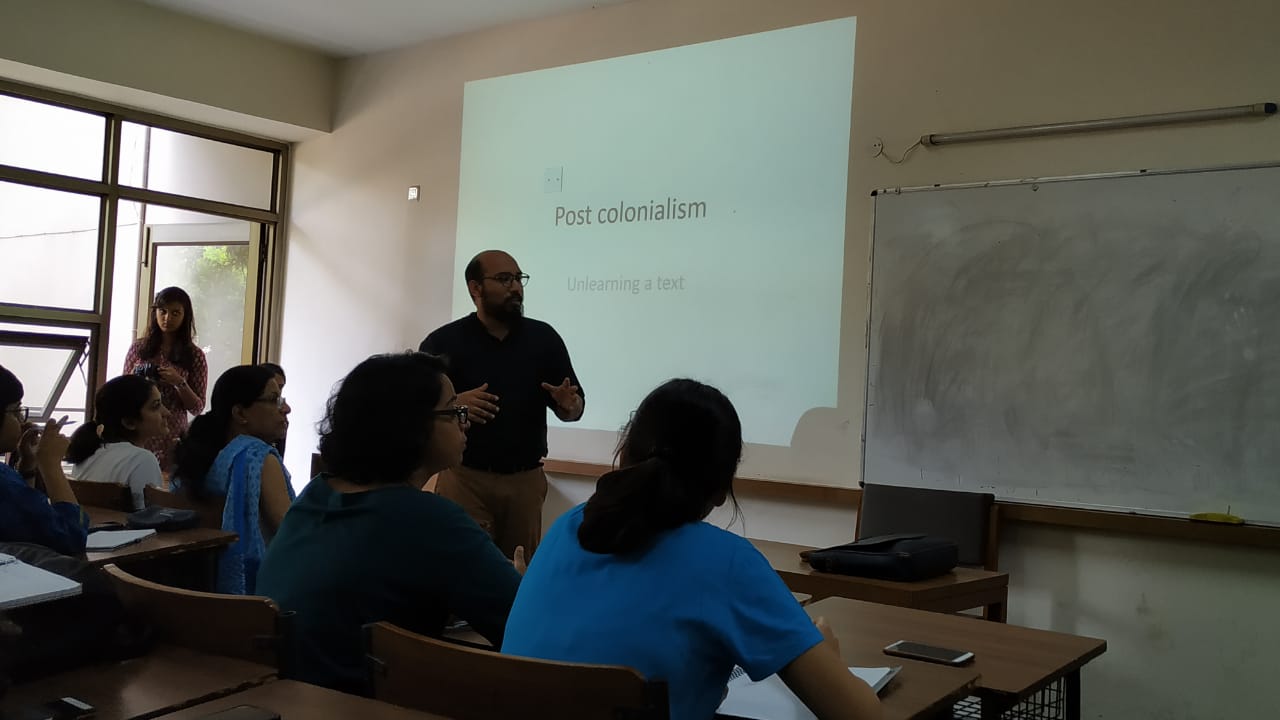 The department of English and Jabberwock organised its second lecture in the series of Litheory 101, where Professor Jonathan Koshy Varghese delivered a rather discursive and an intellectually stimulating lecture on Postcolonial Theory for the students of the English Department across all three years.
The lecture commenced with a power point presentation which began by firstly addressing one of the most renowned works by Edward Said, Orientalism (1978). Professor Varghese led a discussion concerning the cover page of Orientalism which featured the work of a French painter, Jean-Leon Gerome : Snake Charmer, oil-on-canvas (1866). Students came up with various perspectives directed towards the painting, which dealt with its setting, subject and situation. The presentation moved forward with a few more paintings by Gerome which students examined to be exoticised images of “the East”. This put across the early notions of the “Other” in the western canon as Said’s ideas were explored further through the session. The presentation showed a news piece about the usage of one of Gerome’s paintings, Slave Market, by a far right German party from recent past which confirmed the prevalence of such notions even in the present times. This orientalist painting highlighted the aggressive, fear-mongering portrayal of Muslim immigrants in that particular political set up and its use was condemned by the director of the Clark Art Institute in Williamstown, Massachusetts, US. It stirred up the class with discussions regarding identity politics, signs of oppression and colonisation of races and gender.
Students were also introduced to postcolonial critiques and readings, such as Gayatri Spivak’s, A Critique of Postcolonial Reason, Edward Said’s, World Text and Critic and Franco Moretti’s, Conjectures on World Literature. This led to conversation about secular criticism and distant reading.
The lecture made the students critically aware about the representation of “other cultures” in literature, and how often literature is crucially silent on matters concerned with colonisation and imperialism. It made clear that universalism made on behalf of canonical Western Literature does not share an outlook through all cultures and there are limitations to such a perspective. The session, also put across the message that marginality, plurality and perceived “Otherness” could be seen as sources of potential change. 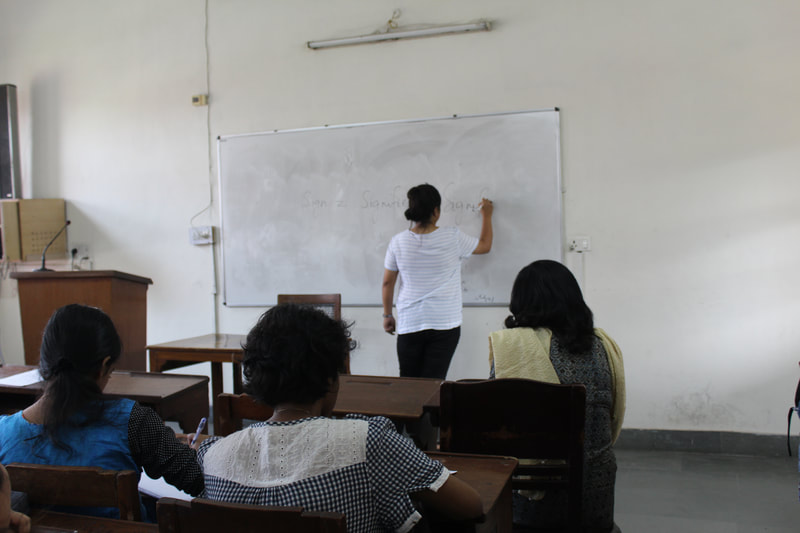 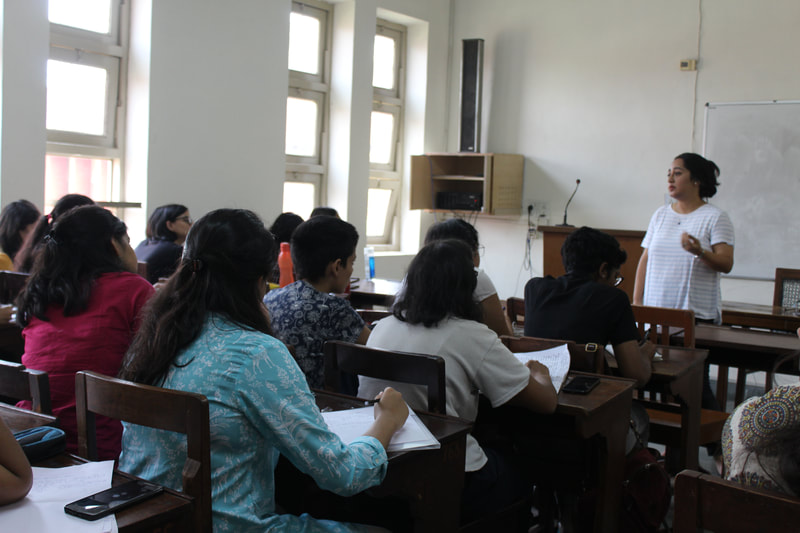 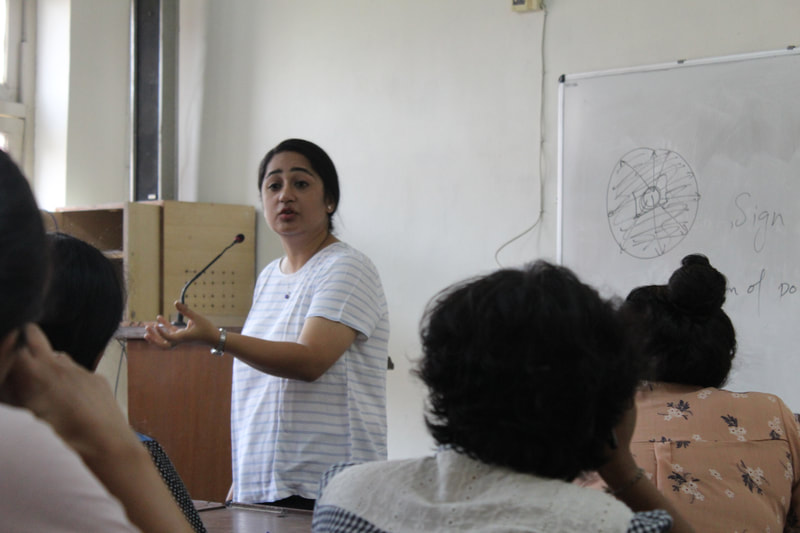 The lecture began by taking a look at the instructive handout which had been circulated online among all the students beforehand. It dealt with the key words, quotes, and referential readings among other things for the Structuralist and Post Structuralist theory. Professor
Hamid started by reviewing the major points from the Liberal Humanist theory which was the topic of the first lecture in the series of Litheory 101. The students recalled the trajectory of shift from religion to humanism and then to language itself as the centre in the world of literature. Professor Hamid went on to explain how language and society are basic unit and the centrality of structuralism. She described how everything crudely boils down to a text and could be read in one form or the other, all of which is part of a “system”, that is how,
language is one kind of a system of everything. This concluded that language could be called the basis of structure, roughly for all the things. Thus, structuralism deals with unearthing and breaking down language and looking for the structure of power, politics, social background and so on.

Professor Hamid then proceeded to post structuralism with a thought provoking analogy. She asked the students to define a circle, which was answered correctly as a collection of points equidistant from the centre, after which she asked the students about the points which lie
inside the circle, not equidistant with the centre. She explained that these points may not define the circle yet they constituted the area and they were a part of the circle. Like other points, the centre also laid as a point but it was more important in this case because it defined
the structure of the circle. This is how, she said, that contradictions lay inside all the structures, it was only a matter of time to gain a diverse outlook in order to derive new definitions to form a broader perception which is also called decentralisation. Post structuralists questioned the centre to redefine structures. They also said that meaning is created not by difference but by difference, a term coined by Jacques Derrida. The post-structuralists also said that “meaning” is ever evolving and structures are contingent depending upon the culture, social background, era and the relevance of the context. The post structuralists questioned the centrality of everything, which contradicts with the very core notions of structuralism. Thus, structuralism and post structuralism go in tandem yet across one another.

Professor Hamid lastly suggested a few readings such as Catherine Belsey’s, Post Structuralism: A Very Short Introduction and Terence Hawkins, Structuralism and Semiotics. She concluded by summing up the lecture, which she said was a crude over view of structuralist and post structuralist theory.